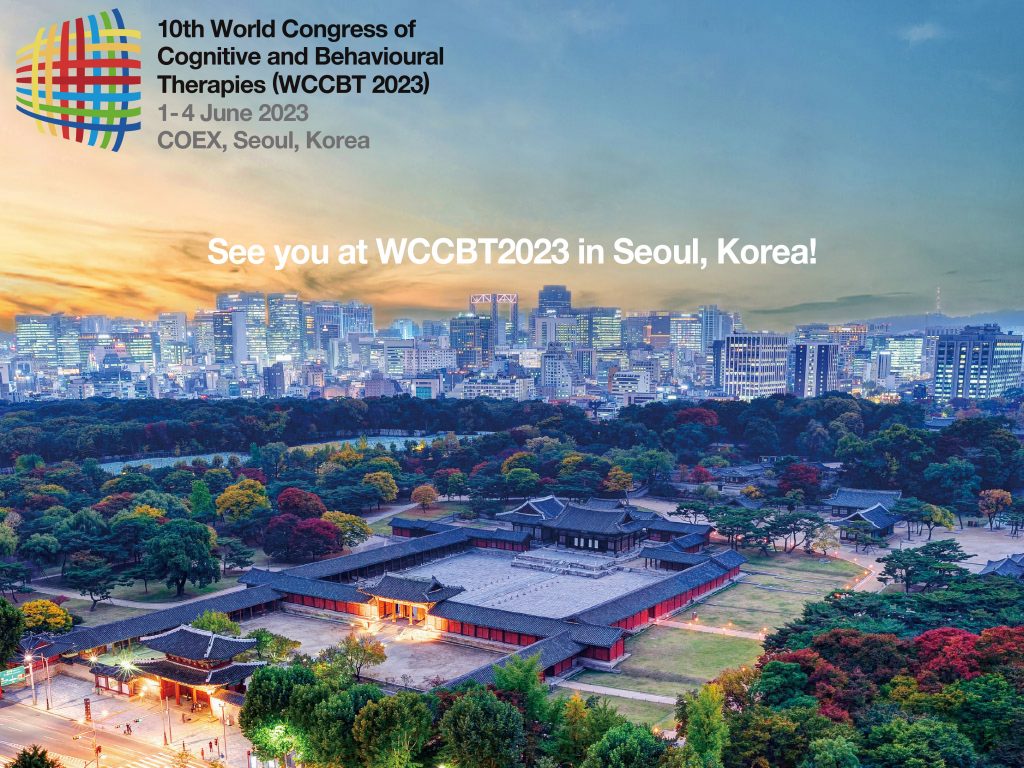 With the agreement of the WCCBT Board the 10th World Congress of Cognitive and Behavioural Therapies will now take place at the beginning of  June, 2023 rather than in 2022 . The COVID-19 pandemic has had a significant impact on preparations and in order to meet the  intellectual aspirations of the congress and welcome delegates to Asia this decision is welcomed

This congress will take place in Seoul, South Korea, one of the world’s most wonderful and fascinating cities. Located along the Han River, Seoul has been the capital city of Korea for more than 600 years since the Joseon Dynasty and is the heart of Korea’s politics, economy, society, and culture. A unique Confucian and Buddhist heritage flourished over six centuries; Korea offers visitors a distinct charm of Oriental traditions. Both the outstanding natural beauty and its unique cultural heritage – from ancient palaces to the K-Pop VR Experience – will make for an exciting and unforgettable visit. We look forward to sharing this unique event and welcoming you to Seoul, Korea in 2023.

The inaugural World CBT day was held on April 7th, 2022, as authorized by the Board of Directors of the WCCBT. Six events took place to mark this initial celebration of cognitive and behavioral therapies, and included events in Europe, Asia, North America, South America, and Australia. These various events were sponsored or managed by a variety of organizations, which deserve great credit and recognition for their efforts in making the day successful.

The program for the World CBT day workshops, professional talks, and public presentations. Doctor Mark Dadds from the University of Sydney provided a workshop entitled “Beyond the manual: How behavioral family interventions work in the real world”, sponsored by the Australian Association for Cognitive and Behavioural Therapy. This was a live event.

The other World CBT Day activities were all virtual, in light of the continuing effects of the global COVID pandemic. A second workshop was provided by Dr. Freedom Leung from the University of Hong Kong. This workshop, entitled “Doing CBT’s with the help of neuroscience” was pre-recorded and hosted by the Association for Behavioral and Cognitive Therapies (ABCT) in the United States.

A second activity also pre-recorded and hosted by ABCT was a lecture by Dr. David Barlow from Boston University entitled “Neuroticism and disorders of emotion: A new synthesis and approach to treatment”.

Finally, Dr. Mehmet Sungur, the Past President of the International Association of Cognitive and Behavioral Therapies conducted an Instagram and YouTube program with a very well-known actor, writer and influencer in Turkey, Ceyda Duvenci. The topic of the discussion was “The impact and significance of CBT in understanding and reducing human suffering and improving quality of life”.

As the above demonstrates, the World CBT Day included presentations to clinical professionals, the academic community, and the public at large. Some of the presentations included a modest registration fee, the proceeds of which will be eventually returned to the World Confederation of Cognitive and Behavioral Therapies, but the primary goal of the event was to highlight the contributions of cognitive and behavioral therapies to the world, and to instil further interest and activity at the international level. World CBT day was a marked success, despite the modest resources that were dedicated to it, and it is hoped that a more vigorous and larger World CBT day will take place on April 7th, 2023. 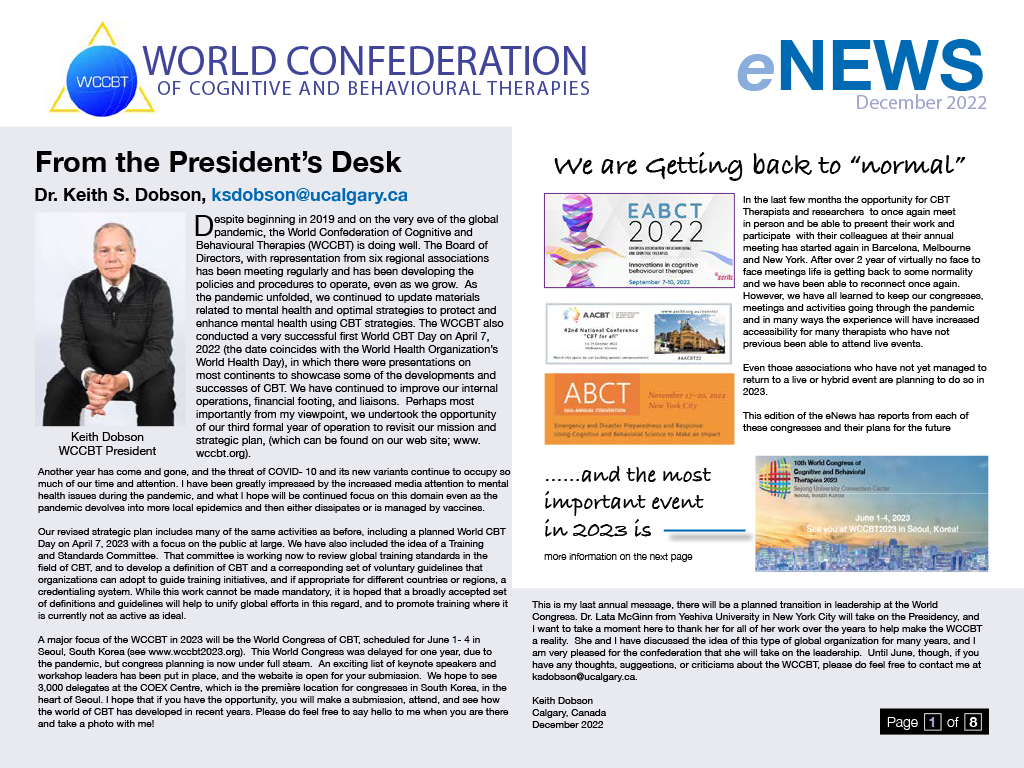 The Attack on Ukraine

The World Confederation of Cognitive and Behaviour Therapies is deeply concerned by the unwarranted attack and aggression on the Ukraine and the psychological impact that this is having on all the people who are being affected. The Ukrainian Association of Cognitive and Behavioral Therapy (UACBT) is a member of the EABCT and the WCCBT and we stand with them to support them through this increasingly difficult and stressful time.

The President of UACBT, Valentyna Parobiy,  has recorded a tube message which is made available for readers to listen to and to offer their support. (see YouTube video https://www.youtube.com/watch?v=j7dFEcqAdo8.  We encourage you to listen to this message and consider your response to those directly affected in the Ukraine and in the countries supporting the refugees. It is our wish for the invasion and conflict to end as soon as possible and for Ukraine to be made safe again.

A special issue of the International Journal of Cognitive Therapy (March 2021) entitled “CBT at the Crossroads” has now been published. It includes 12 original review articles covering a wide range of areas from WCBCT2019 plus an excellent editorial by Simon Blackwell and Thomas Heidenreich. It has been published online and is well worth a read with most articles being open access. The link is

The Centre for Clinical Interventions (CCI) is pleased to announce the release of our latest set of consumer modules  ‘Stepping Out of Social Anxiety’.  Since the 2003 release of CCI’s original set of social anxiety modules,Shy No Longer, CCI’s social anxiety treatment program has evolved considerably to reflect the state-of-the-art of the theoretical and empirical literature, and the contributions of CCI’s own applied clinical research program. This culminated in our recent randomised controlled trial which demonstrated that our imagery-enhanced and verbally-based group CBT programs for social anxiety both had effect sizes comparable to the largest effects found in the literature to date.